Electric Cars Give New Life to Mine Excavated for Nuclear Power

At this year’s BDI Raw Materials Congress in the course of a panel discussion on the topic of raw material purchasing, the representative of a large German car manufacturer said that they “have been buying raw materials for over 120 years”, so they know exactly what they are doing and merely because of their size, they are in a comfortable situation and have a lot of insight over both supply and demand (of battery metals).

“It is not too late yet“ – VW-boss Diess laments the 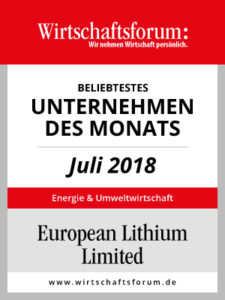 We are delighted to have received ‘Most Popular Company of the Month of July 2018’ in the Energy and Environmental Sector of the recognised and respected German business network, Wirtschaftsforum.

EUR is featured in an article on the Wirtschaftsforum website that opens with the following:

Lithium is one of the most exciting raw materials of our time. It is at the heart of a movement away from fossil fuels to a greener future. Lithium is a component of Li-ion battery chemistry for highly efficient rechargeable batteries. A resource that has the potential to be bigger than 18 million tonnes – one of the largest deposits in Europe – is expected to be mined in Austria. And European Lithium Limited, based in Wolfsberg, Carinthia prepares for mining.

Find the full article about the Company on the Wirtschaftsforum website (only available in German.)

Demand for lithium, one of the key materials used in making lithium ion batteries, is rising rapidly. The metal is used in a wide variety of industrial applications including glass, ceramics and greases, but it’s the use of lithium as a key component in the batteries that power electric and hybrid electric vehicles that has so excited markets.

If electric vehicles, which rely wholly or partly on electricity stored in batteries as their source of energy, revolutionize road transport in the way many expect, demand for the metal will rise exponentially. China will be at the forefront of this. 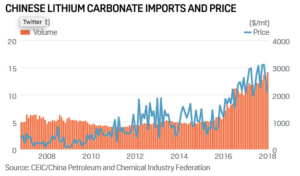 First Berlin Equity Research has updated its recommendation to BUY with a price target of € 0.19. It believes there will be scope to raise this price target, if, as it expects, European Lithium raises the measured indicated part of its JORC resource to over 10m tonnes by the end of this year.

Since we published our initiating coverage study on 7 March, European Lithium has published a preliminary feasibility study (PFS) of the Wolfsberg project, released drilling results for Zone 2 of the deposit, and announced the promotion of Dietrich Wanke from General Manager to CEO.

Since the publication of the PFS, discussions with potential partners have intensified and management now expects that the most likely financing solution for the definitive feasibility study and bringing the mine to production is a partnership with/takeover by an industrial lithium user.

Several automakers have teamed up to create the IONITY electric charging network across Europe.

Roskill – The battery alliance brings the EU and a suite of largely German firms, including automakers Volkswagen and Daimler, engineering company Siemens, and chemical group BASF together.