The resource declarations by previous owners included inferred resources from extrapolation of identified significant pegmatite veins at depth to RL1100m. JORC Code (2012) reporting standard requires that all resources declared follow sampling. A deep hole drilling programme (4 holes in total) was completed, results of the initial two holes confirming the extension of the pegmatite veins to depth. The resource at Wolfsberg Zone 1, comprising the previously declared Measured and Indicated resource and new Inferred resource are summarised below. 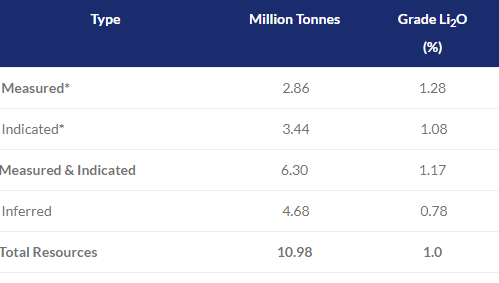 *Measured and Indicated resource at a cut-off grade of 0% Li2O as the veins will be mined contact to contact.

Zone 1 is the northern limb of an anticline. Surface boulder mapping and scout drilling in 2012 indicated that the lithium bearing pegmatite veins extended to the southern limb of the anticline known as Zone 2. A drilling programme commenced with 2 of 3 drill holes intersecting wide and high lithium grade pegmatite veins. This programme resumes in January 2018.

The previous resource declarations by Minerex and GSM were not compliant with JORC Code (2012) reporting standard and the original drill core and QA/QC procedure no longer exist. The Company located almost all the primary data of Minerex at the Ministry archives in Vienna, Austria. This data was logged and sorted into the Company database. A verification programme of twin hole drilling and underground channel sampling was carried out in 2016 to compare with the original Minerex data. This showed that the data sets from Minerex and that from the verification programme were not significantly different. The competent person verified the Minerex data for use in a JORC Code (2012) compliant resource and was reported in November 2016 as:

*Measured and Indicated resource at a cut-off grade of 0% Li2O as the veins will be mined contact to contact. 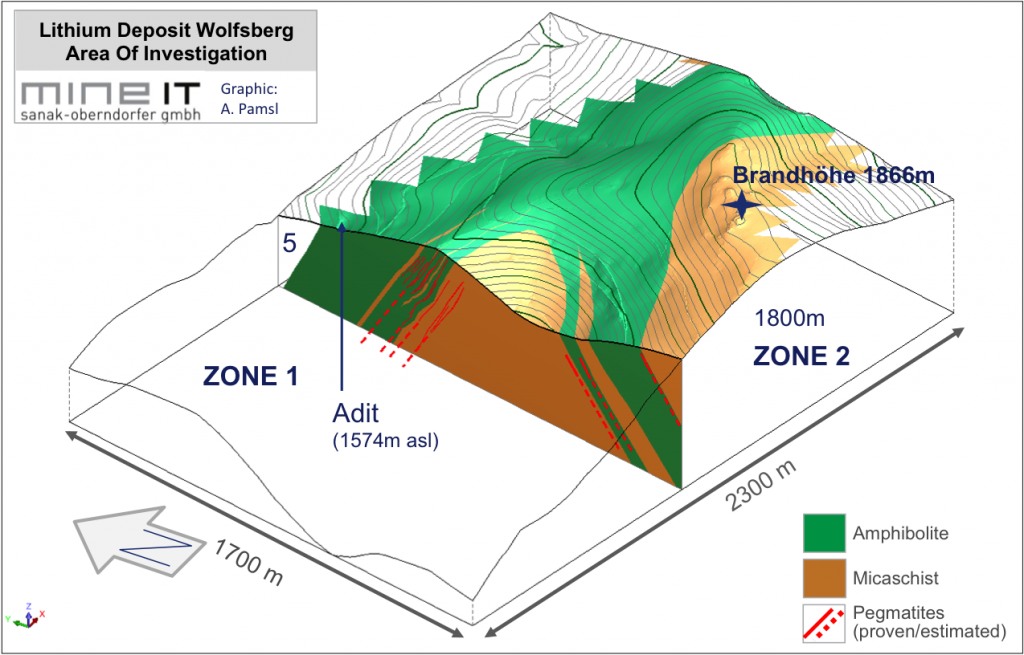 Following the acquisition of the Wolfsberg project, GSM undertook exploration drilling in 2012 on the southern limb of the anticline which confirmed the structural interpretation and presence of lithium bearing pegmatite veins. Mining was undertaken in 2013 to validate the mining license and to collect 500 tonne bulk samples from the two ore types for metallurgical testing. The Minerex drilling data was utilised to develop a three dimensional resource model for use in mine planning.

Deposit is split into two zones:

the northern limb of an anticline was drilled by Minerex down dip to a maximum depth of 450m and mapped over a distance of 1500m. Lithium bearing pegmatite veins up to 5.5m wide intersected and ore body remains open along strike to the west and down dip. Minerex completed 16,727m of drilling and 1,389m of mine development including access decline, drives and crosscuts.

exploration target, demonstrated to be the southern limb of an anticline of which the northern limb (Zone 1), was the focus of all exploration by Minerex. This area is believed to have the potential to mirror the resources of Zone 1.

The resource was declared by previous owners to German and Austrian reporting standards and by GSM to JORC Code (2004):

Minerex completed exploration work that comprised initial surface geology mapping along with 9,940m³of surface trenches and a diamond drilling programme totalling 12,012m collared from surface. In 1985 an underground exploration programme was undertaken including development of a decline from the surface from the northern side of Brandrucken Mountain through the amphibole schist to provide access to the pegmatite veins. Crosscutting drifts were driven along strike of selected veins to provide access for mapping and sampling and an additional decline was driven to access the veins in the mica schist. In all 1,389m ofunderground development was mined. A diamond drilling campaign of 4,715m was undertaken from underground to effectively infill the surface drilling to about 50m intervals in the eastern part of Zone 1. 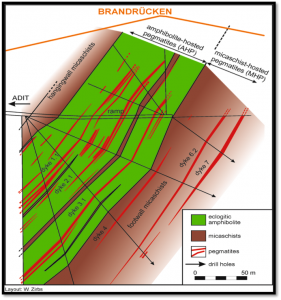